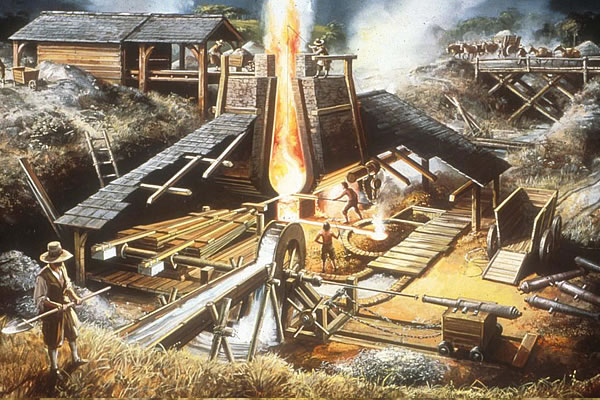 Horsmonden was one of the centres of the old Wealden ironworking region and Furnace Pond is one of the largest and finest of the artificial lakes made to provide water power for the great hammers. Furnace Pond has an area of 30 acres and a spillway. The dam across the valley is some 140 yards in length with the head available being some 30 feet.

The mill wheel is no longer there, although the water still cascades over the spillway steps and the circular basin at the bottom in which the wheel used to turn is still there.

At its height, the Horsmonden Furnace employed two hundred men in making great guns for the Army and Navy.

The reason Horsmonden was a good location for an iron foundry was the availability of water, iron and wood, as well as access to Chatham Dockyards via Yalding and the River Medway. 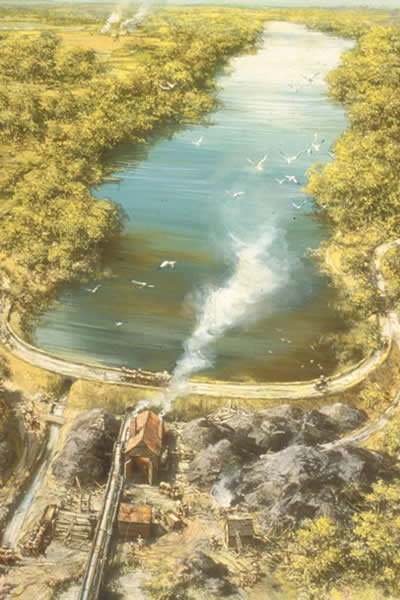 The Horsmonden Furnace was first mentioned in 1574, when the owner was Thomas Bartell or Brattle.

In 1579 it was leased by Henry and Thomas Darrell to Thomas Dyke, with Brattle having an interest in the property.

In 1588 the furnace was leased by William Ashburnham and sub-leased to Thomas Johnson, a gunfounder.

One of Thomas Johnson’s cannons was excavated in Sluis, a former harbour on the Flemish-Dutch coast and is the only one we know about.

Some letters referred to January-February of 1595 when there was a threatened attack on the furnace and ironworks at Horsmonden, belonging to the Queen’s gunfounder, Thomas Johnson.

The furnace is referred to as ‘Sharndon Furnace’. The clothiers were opposed to building of ironworks because they used up fuel and water power. Also mentioned was a Parliamentary bill bought forward for the demolishing of all ironworks within seven miles of Cranbrook, the centre of the Wealden cloth trade, which would have just affected Horsmonden.

In 1596 the furnace was owned by Sir Thomas Waller, and leased to John Iden and Robert Pothill.

The furnace was leased by Thomas Browne in 1604 and later transferred to his son, John Browne, who held the office of King’s Gunfounder from 1615 to 1681. Some 200 men were employed at the furnace in 1613.

The principal foreign purchasers of English guns were the Dutch, during the war of liberation from the Spanish yoke in the later part of the sixteenth century. Such purchases continued in the seventeenth century, when the Dutch Navy continually increased in size and, importance, so that Holland became the principal maritime power.

No effort was spared by the Dutch to procure cast-iron guns manufactured in England; for example, in the years 1615 to 1618 they were purchasing half the produce of John Browne’s gunfoundry at Horsmonden in Kent. He employed two hundred men (a very considerable number in this early period), to use his own words, ‘the Dutch havinge bargained with him to take of all that the English doe not buy’; the number of guns ready for transportation from the works to Holland amounted to six hundred during those years.

Frequently Dutch merchants such as Ludolph Engelstedt and Giles de Vischer, in 1594 to 1596 acting as special agents for their Government, stayed in England to buy cast-iron cannon and to procure export licences from the English Government.

John Browne had the monopoly on manufacture of Royal guns and in 1625, after the outbreak of the Spanish War, his foundry made five hundred guns for the British ships.

King Charles I visited the foundry in 1638 to watch a cannon being cast – a bronze four-pounder, forty-two inches long, now preserved in the White Tower at the Tower of London.

The civil war which started in 1642 gave a new impetus to gunfounding in the Weald. Twenty-six furnaces, referred to in 1653, were engaged in the production of guns and shot for Charles I, and so were two furnaces (Cannop and Lydbrook) in the Forest of Dean. In 1664, eleven furnaces operating in the Weald made cannon and bullets for the Dutch war, and thirteen further furnaces were restored and stocked. The most important gun-founders in the Weald during the seventeenth century were the Brownes of Horsmonden.

Not long after the start of the civil war, John Browne found himself in trouble because despite his previous Royal patronage he sided with the Parliamentarians in the Civil War and would not make guns for the Royalists.

The high price of English guns was no deterrent to continental purchasers, since they were well aware of their superior quality. This is reflected in their frequent attempts to induce English founders to work abroad, and to obtain cannon by illegal trade and bribery, if they could not be procured from English founders authorised to sell abroad.

Moreover in 1598, an Englishman wrote from Spain that all seafaring men agree ‘that they never see cast ordnance of iron but such as is made in England’. More convincing than the demand from the continental market is the term ‘after the English fashion’ applied to the casting of iron guns in German Westfalia in 1592, and in Sweden in 1600. This term clearly signifies that English gunfounding was the model for their colleagues on the Continent.

Naturally foreign gunfounders could not rest until they had found out what the ‘English fashion’ of casting was. The first, who in 1620 claimed to have succeeded by discovering the secret on journeys they made in England and from iron-merchants they met on the Continent, were two citizens of Namur, in Belgium, Henri de Harscamp and Guillaume de Moniot. They erected furnaces in the vicinity of Namur to put their discovery into practice. This was the starting point of a competition which intensified when shortly afterwards gunfounding was introduced from Liege into Sweden. The superior Swedish ore made it possible to produce guns which finally ousted the English cast-iron cannon from the Continental market.

Yalding was a main shipment point for the cannons manufactured here, where the cannons were shipped via the River Medway to the naval base at Chatham.

The famous foundry finally closed in 1685 when the manufacture of iron moved to the Midlands with their coal fired plants. In 1744 there was a boring mill run by one Harrison at the site.

You can visit the site of Horsmonden Furnace and see Furnace Pond and the spillway. It is still remembered both by The Gun and Spitroast, formerly The Gun, named after it when it became an inn round about 1750, and also by the cannon carved on one quarter of the village sign.

This timeline attempts to put into context the operation of Horsmonden Furnace as a gun foundry against related conflicts and political happenings of the era.

1579 – Leased by Henry and Thomas Darrell to Thomas Dyke

1588 – Leased by William Ashburnham and sub-leased to Thomas Johnson, a gunfounder

1595 – Threatened attack on furnace by clothiers

1596 – Owned by Sir Thomas Waller, and leased to John Iden and Robert Pothill

1615-18 Dutch purchasing half the furnace output of cannons

1645 – John Browne and his son were ordered by Parliament to be taken into safe custody but later released.

1660 – Restoration of the Monarchy

1688 – William Benge is gunfounder at Horsmonden.

Iron guns ‘After the English Fashion’