You are here: Home › Village Vision

What is a “Village Vision” and what does the village get out of it?

It is a way of collecting together what the people in the Village think are the good and bad points of living and working in Horsmonden and turning that into a list of projects that will improve the village and attract funds to make the projects happen; 105 villages in Kent have produced, or are producing, a plan for their village and are benefitting from it. 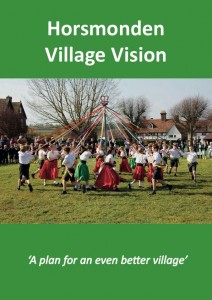 All the people who live and work in Horsmonden were invited to take part.

A group of people from the village who were keen to see the project succeed and were willing to put their own time into making it happen. This was not a Parish Council led project though the Parish Council had representatives on the group who ran the project.

How did this start?

Jane March, the Chair of the Parish Council saw what other villages had done and asked Nick May and Ken Tutt to see if there would be interest in Horsmonden and kick off the project. A meeting was held and attended by about 30 villagers who have jobs in the village community today – such as running clubs or businesses – to see what they thought about the idea. At the end of the meeting there was unanimous agreement that we should try and produce a Village Vision for Horsmonden.

What did it cost and who paid?

The Village Vision cost around £5,000 to complete to the point where we have a plan. This was paid for by a mixture of grants given by a number of bodies supported by national and local government and Horsmonden Parish Council.

There were two open days:

Every house in the village received an invitation for everyone to come to an open day of their choice where they looked at projects that other villages have done and commented on post it notes about the facilities in this village; for example roads, transport, schools, shops, green issues such as rubbish collection and anything else that is important to them.

There were also be presentations to some of the village clubs such as the Youth Club and the Over Sixties to make sure that all sections of the community are included and to find out the priorities of the members of those clubs.

The suggestions that most people feel are important were put in a questionnaire for each household so that all the village were able to comment on the suggestions and rate their importance. Then the Village Vision was produced and distributed to each household.

Village Vision has finished its consultation which took in two open days and a session at each of the School, Youth Club and Over 60’s club.

As a spin off from the process so far Neil Rigby organised the first ever Horsmonden Business Breakfast meeting held at the Gun and Spitroast on the morning of 18th November 2010 at 7.00am. About 34 people attended, the Village Vision was presented to all those who had not seen it before, everyone had 30 seconds to introduce themselves and their business then “network”. The event went down very well and a follow up meeting was held on 26th May 2011.

We have seen more than 350 people representing more than 150 households and we have over 800 post-it notes with a number of common themes.