You are here: Home › History › World War II › Half a Second over Horsmonden

Half a Second over Horsmonden

It is 10.30pm on Monday 3rd July 1944 (about a month after the D-Day Landings) and it's still light as Flight Lieutenant William Lister 'Dusty' Miller lifts off in his Hawker Tempest V from RAF Newchurch in Kent.

The V-1 flying bombs have commenced their reign of terror on England and Dusty's 486 (NZ) Squadron is in the frontline of 'Doodlebug Alley'. Their task is to shoot them down before they reach their target.

Dusty is immediately vectored west towards Rye and within minutes he sights one of the bombs on a course towards London. Moving at over 400mph the pilot must immediately dive towards and attack the target before it disappears.

A Spitfire joins in

As Dusty moves in he notices a Supermarine MkXIV Spitfire on his right also moving towards the same target and in a bit of fun the two aircraft commence the chase, throttles wide open.

As they close in the flak batteries below also commence their attack and the grey puffs of deadly smoke start to appear in front of the two aircraft. Now they are also at risk from friendly fire so the decision is made almost simultaneously and the two aircraft break away left and right – leaving the bomb to the flak. 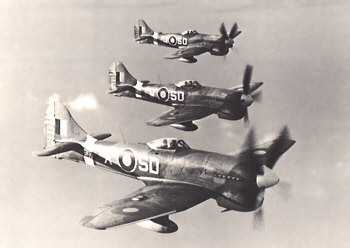 As Dusty turns he notices that the Napier Sabre engine in his aircraft is misfiring – time to land. But by now the long evening twilight is closing and although he can see ground directly below anything on an angle is lost in a darkening purple haze. Knowing that a forced landing at night is likely to have fatal consequences, the decision is made to bale out. A quick call to the ground controller confirms that he should exit the aircraft immediately.

Raising the nose of the Tempest to slow down Dusty releases his straps and reaches for the emergency canopy release. It is at this point in time that fate takes over and deals the first hand. The canopy jams and the pilot finds it will not come away from the aircraft.

Reaching for the handle he attempts to wind the canopy back. It works and the cold night air rushes in. Turning the aircraft on its side the young New Zealander pushes the stick forward to push him out – much like a cork from a bottle. As he is ejected from the aeroplane the same force now winds the canopy closed and Dusty finds he is half in and half out of the aircraft – the canopy trapping him by his parachute.

By now the Tempest is commencing its deadly dive towards the ground and Dusty is being buffeted by 200mph winds. He must force the canopy open before he is knocked unconscious. With one hand on the front glass and one on the canopy he pushes and it opens again! Ejected into the air Dusty watches for what seems an age as the tail of the aircraft slides past.

Now it is decision time and fate steps in again. Dare he open the parachute at this speed and risk it being wrenched off – but how high is he? Waiting a split second that seems forever Dusty reaches in front and pulls the rip-chord. Immediately his right arm is almost wrenched out of its socket as it is pulled straight upwards. Fearing the worst he looks up to make sure his arm is still attached – it is. The straps on his parachute must have caught the canopy and become tangled around his arm. He brings his hand down and the chute billows open.

Drops in to Horsmonden

At the same time a local farmer and his wife have heard the noise of an approaching aircraft and rush outside. All they see is a parachute open and a man immediately hit the ground. Dusty has landed but fate has been kind. To Dusty it too appears very little time between parachute opening and the arrival of the ground. He sees a fence approaching but can't miss it and bangs his leg on it before landing.

He is taken in for tea and Will Thomsett from next door arrives in his car. He can take the pilot to his house and use the telephone to call base. They drive down the country lane past the orchard – but this one has borne fiery fruit.

The Tempest has crashed in the middle and is exploding. Fire, ammunition and aircraft parts are noisily destroying the crop. If fate had changed its fickle mind William Miller might have been in that paddock as well. They both comment on a smaller harvest and proceed to the house.

It is about now that Dusty thinks about the time between his parachute opening and his landing. It is something that he continues to think about to the present day. He estimates that he was less than half a second between life and death with the opening of that parachute.

It opened less than 100 feet above the ground.

Formed 7 March 1942 at Kirton-in-Lindsey, Lincolnshire. No 486 began as a night-fighter squadron equipped with Hurricane aircraft. Re-equipped with Hawker Typhoons in September 1942, was prominent in south coast defence against sneak raiders until June 1943. Then flew mainly as fighter bombers until February 1944. Re-equipped with Hawker Tempests in April and after D-Day took a prominent part in defence against flying bombs. After moving to the Continent in September the squadron was employed on standing patrols and armed reconnaissance over Holland and Germany with Second Tactical Air Force.

Newchurch is located on the Romney Marsh, three miles west of Dymchurch and during the Second World War it was home to an RAF airfield operating Hawker Tempest fighter aircraft under Wing Commander Roland Beamont from April 1944 to September 1944. They took part in the defence against the German V-1 flying bomb offensive of 1944. A Chain Home coastal radar station was also located there.

Dusty revisited the farm of Will Thomsett at Horsmonden later that month and sampled the ale produced from his house.

Fifty years later (almost to the day) Dusty Miller returned to the farm now owned by Will's son Bill. Bill was eight years old when Dusty's aircraft arrived at the orchard and could remember the events quite clearly.

The orchard had now become a pea field. Aviation archaeologists dug into the ground and removed significant portions of the Hawker Tempest (SA-Z), including that displayed in the New Zealand Fighter Pilots Museum.