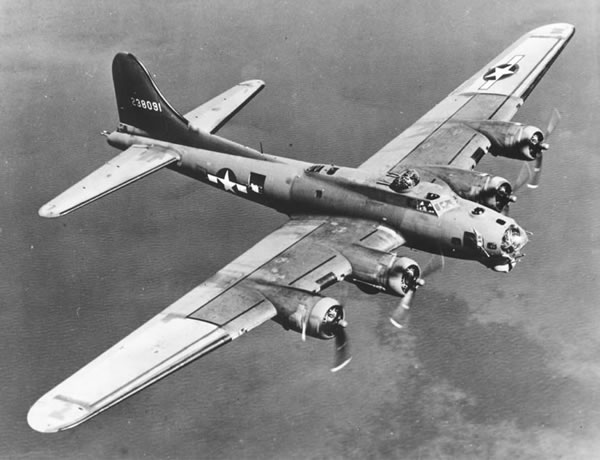 Their motto, Might in Flight, was earned on each of their record 364 combat missions. One of their aircraft crash landed at August Pitts, Horsmonden after a bombing mission to Frankfurt.

Two engines were shot out a few seconds after bombs away. None of the gun turrets had power. Knowing that they had a fuel shortage, Lt Worthley tried to reach the RAF emergency field at West Malling in Kent.

The remaining two engines cut out and the Fortress went down through some oak trees. The tail section remained in one of the trees and the #4 engine was torn off. The B-17 came to rest in a hop field of the August Pitts farm near Horsmonden. 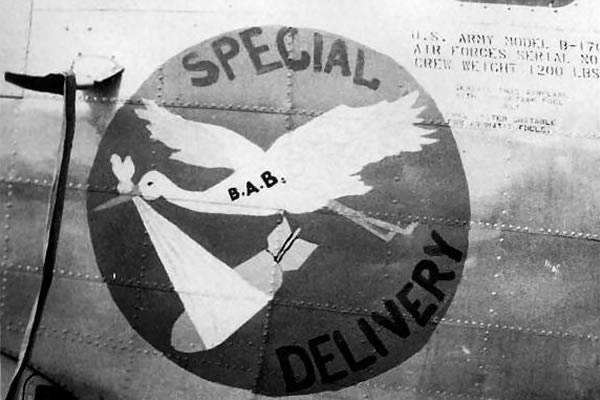 303rd BG (H) Combat Mission No. 108 took place on 11 February 1944, the target being Frankfurt in Germany. There were 21 crews dispatched with 1 KIA and 7 injured. The length of mission was 8 hours. Frankfurt was bombed for the fourth time since 29 January 1944. Six of the 21 aircraft
airborne were abortive.

P-47s escorted bombers on penetration, P-51s and P-38s provided target support, and P-47s and RAF Spitfires escorted the B-17s on withdrawal. Approximately six to eight enemy fighters were seen. No attacks were made on the 303rd BG(H) and no enemy aircraft claims were made. Flak at the target was moderate and accurate. Chaff was discharged from the vicinity of the IP until two minutes past the target. Crews reported it as effective, but the flak continued after the formation left the target. Rockets from the ground were seen just after leaving the target, but went far above the formation with no explosions observed.

They were unable to keep up with the formation or maintain altitude. None of their gun turrets had power. Fortunately they had no enemy fighters around. Knowing that they had a fuel shortage they tried to reach the RAF emergency field at West Malling. They assumed crash landing positions in the radio room [located under the dorsal gun position] since they were too low to bail out.

The two remaining engines cut out and the Fortress went down through oak trees. The tail section remained in one of the trees, the No. 4 engine was torn off and the B-17 came to rest in the hop field of August Pitt’s farm near Horsmonden, Kent, England. S/Sgt. Edwin D. Johnson, engineer, was killed in the crash.

Lt. Kenneth D. Crook, the co-pilot, was not injured. He became a PoW following the 24 February mission to Schweinfurt. The rest of the injured crewmen were sent back to the USA for rehabilitation.

Pilot, 2Lt. Joe Worthley, flying with a different crew, was killed over Berlin on 24 May 1944 from a direct flak hit in the cockpit. He was on his 25th and last mission.

Lt. Deane Barnes, pilot of Buzz Blonde 427BS-S said, “We didn’t see where our bombs landed, but we could see through a hole in the clouds that we were over the target when the bombs were dropped. There were a few enemy fighters around, but our fighter cover was so perfect that the Germans couldn’t get at us.” Fighter cover was also praised by S/Sgt. Lowery Weed, top turret gunner of Mizpah who said, “We had everything under the sun for fighter escort. They didn’t let anything come near us.” “The flak wasn’t as bad as last time,” said Sgt. Andrew G. Benevento, radio operator on Buzz Blonde. We saw a few fighters, but they stayed down below us and wouldn’t come up and mix with us at all.”

Lt. Litman, pilot of Clover Leaf 358BS-C, was critical of the last fighter support believed to be RAF Spitfires. He stated, “They were dog-fighting and fooling around among themselves. This action caused our crew undue suspense–believing that there were enemy aircraft present.”

The city of Frankfurt am Main was severely bombed by the Allies during World War II. The city centre was destroyed by numerous air raids and about 5,500 residents were killed. The famous medieval city centre and historic Paulskirche were destroyed.

On 29 January 1944, the USAAF Eighth Air Force bombed Frankfurt during daylight. That day Princess Marie Alexandra of Baden was killed in an air-raid on Frankfurt.

On 22 March 1944, a Royal Air Force attack destroyed the old part of Frankfurt and over 1,000 inhabitants died. The east port, a significant shipping point for bulk goods with its own rail connection, suffered major damage.

Most of the information in this article is takend from this website. It is well worth a visit and forms an important historical record of their activity.