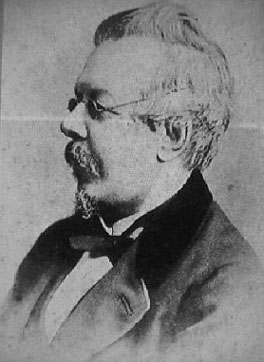 Creator of the Moon Alphabet for the blind

Over a hundred years ago today, William Moon died at the age of 75; just two months short of his 76th birthday. He was born in humble circumstances in the village of Horsmonden near Tunbridge Wells on the 18th December, 1818. He was a normal healthy child until he contracted scarlet fever – a terrible scourge in those days. It left him totally blind in one eye, and with severe visual loss in the other.

After this tragedy, his parents moved to Brighton, leaving young William in the care of his grandparents. We don't know the reason for this; it was certainly not neglect; indeed William's mother was a strong influence throughout his upbringing, and largely responsible for implanting in him a firm Christian faith. In time he attended a school in London. This was a school for pupils with normal sight, and it is interesting to note that years later, when he wrote about the education of blind children, William expressed his opinion that blind children should always be educated alongside their sighted peers. In many ways his ideas were advanced for this time, and much in line with how we think today.

On leaving school, William went to live with his widowed mother in Brighton. His ambition was to train for the Non-conformist ministry. However, this was not to be. His sight had been steadily deteriorating, and despite efforts to save what remained, by 21 William Moon was totally blind.

William wasted no time on self-pity. He decided to try and teach other blind people to read by touch. Braille was not known in Britain at that time, but there were a number of other systems available. Wisely, William had learnt some of these before going blind himself. He therefore gathered together a variety of blind people and began teaching them to read. These pupils were extremely varied regarding age and ability. However, like most teachers, he had both successes and failures. It was the failures that most concerned him, particularly one boy whom he described as being 'very defective in intelligence.' This lad seemed quite unable to learn to read through his finger-tips by any of the known systems. William thought and prayed hard about this, and eventually began to devise a new system of raised, simplified lettering. To his delight, the boy stared to read by this method, and within a week was able to read simple sentences. The system later known as 'Moon', had been invented.

In 1842 William married Mary Ann Caudle, the daughter of a well-known Brighton surgeon. Life was very difficult for the couple at the outset of their married life. They had little money. William taught at a blind school, and Mary attempted to run an embroidery shop. They had two children: Robert, born in 1844, and Adelaide born the following year. The family were continually on the move from one lodging house to another, but despite this, William obtained a wooden printing press and began to print passages of scripture in his embossed simplified lettering. Later he devised a means whereby a great number of copies could be produced at relatively low cost.

William's object in developing his system was twofold. He wanted to teach blind people to read through their fingers, but he also wanted to help them to read the Bible for themselves with attention and understanding. His system was taken up by the British and Foreign Bible Society as well as by other missionary bodies. In this way it spread to many distant parts of the world. Eventually it was used to print reading material in over 400 languages, some of which had no alphabet, as for example the Chinese dialects. By the middle of the 1850s life had improved. The Moon family had moved to 104 Queens Road, and William had his printing house next door. In 1858 the complete English Bible was produced in Moon. The printing had taken ten years to accomplish, and consisted of 5,000 pages contained in 60 volumes.

In the early 1850s William met the man who was to become, outside his own family, his closest friend and supporter. Sir Charles Lowther (Bart.) was another victim of scarlet fever, and had been blind since infancy. He was a rich God-fearing man with position and influence. Over a period of about 40 years he used these gifts to further William's work, as he considered the moon system to be the best one for enabling the blind to read by touch.

William originated the idea of the Home Teaching Society. It was a simple plan. A group of interested people would form a committee, and then engage a teacher of the blind whose task it was to seek out and teach the blind in that area to read moon. Much of the reading was scriptural, so it was the teacher's responsibility to discuss this with the blind person, and to keep him or her supplied with books. The books were obtained from free lending libraries of moon books, maintained by local charity and the generosity of individual benefactors like Sir Charles Lowther. Home Teaching Societies spread throughout Britain and beyond to Sweden, Canada, the United States and Australia.

William travelled widely throughout his life, promoting his system and also as a preacher of the Gospel. He was a fine evangelist, and drew large crowds to hear his message. He toured most regions of the United Kingdom, and also visited France, Holland, Germany, Sweden and the United States. His son Robert often accompanied him on these tours; one such tour occurred when Robert was only 16: father and son crossed to Holland taking with them a moon printing press which they delivered to the Rotterdam Institute for the Blind. What a journey that must have been!

William's family played an important part in his work. Mary helped him in the early stages when he was developing his printing technique. Robert worked with his father in designing raised line drawings of animals and buildings for the education of young blind children. Relief maps with moon symbols were also prepared, and an astronomical atlas. The wonder and immensity of the heavens were never far from William's thoughts, and he regarded an awareness of these things to be an important part of life. Later on Robert qualified in medicine, finally settling in Philadelphia where he became a distinguished eye specialist, and continued to promote his father's reading system among the blind throughout America. 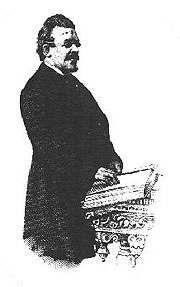 William's daughter, Adelaide, remained with her parents in Brighton, and helped her father run the printing house which despatched moon books all over the world. After his death, she continued with the work, and received regular support from her brother. Robert and Adelaide worked together in this way for the next 20 years, both dying in 1914. Altogether, the children were a great credit to their parents. They helped William through the difficult period surrounding Mary's death in 1864, and supported him when, two years later, he married Anna Maria Elsdale.

In 1882 William and Adelaide toured the United States. Among the many cities visited were New York, Washington, Boston, Chicago and, of course, Philadelphia, where William received an honorary doctorate of law from the university.

The present Brighton Society for the blind is a direct continuation of the meetings started by Dr Moon, and which were held in the Town Hall. Following a brief service, a 'substantial tea', to quote William's account, was then provided. He soon found that for many of the blind, this 'substantial tea' was often their first meal of the day. This discovery led him to arrange a regular and organized distribution of food, clothing and coal for those in the greatest need.

It is therefore with great joy that we salute and give thanks for the life of this wonderful Brightonian who was so many things to so many people: Inventor of a reading system still very much in use today – Teacher – Educationalist – Social benefactor – Evangelist. Perhaps there is one word which, when taken in its fullest sense, can describe this remarkable man: it is 'Pastor'. Dr William Moon was a true pastor for the blind – everywhere.