Ted was born in Heath Forge House in Horsmonden in 1899 and lived in the village all his life.

His father Walter owned the forge that was situated just behind where the pharmacy is currently situated. This can be seen in the photograph showing the forge and Heath Forge House where Ted is seen in his mother’s arms as a baby.

In 1906 the family moved the business to what became Rams Hill Service Station, where young Ted can be seen standing between the two horses at the newly sited forge.
When his father retired in 1935 the then mode of transport, horse and carriage, was superseded by the motor car.

Ted decided to have two manual petrol pumps installed to meet the growing demand for petrol.
He soon progressed into servicing cars as well as running a taxi service.
The pumps were upgraded to mains electricity in the late 1940’s.

Ted retired in the mid 60’s and his son Alan took over the business and added garden machinery and a general shop, the type of which are commonplace in all petrol stations nowadays – perhaps the petrol station convenience store started here!

Alan stopped selling petrol in 2006 exactly 100 years after his grandfather moved to Rams Hill. Alan himself retired when he was 70 but the new owners continued with the garden machinery business which continues to thrive.
……………..

As part of a school research project during 1987, James Turnbull who lived in the cottage just past Rams Hill Service Station, interviewed Ted about his memories which stretched right back to the turn of the century.

Memories from someone who saw and knew a very different Horsmonden to the one we all know today!

The following memories are as they were spoken by Ted and recorded by James.

“My first memory was when we had a forge at the Green on the site of the present chemist shop.
I was only 3 years of age and my mother lifted me out of bed to see some soldiers in white helmets, red tunics and dark blue trousers marching by. These were local lads, who had returned from the Boer War and the year was 1902.

The local doctor lived in the Poplars across the Green and he did all his visiting on horseback. A big grey horse, he was a hunting man and a familiar site in his black silk top hat and white breeches.
Cricket was played on the Green with the wickets being long strips of coconut matting and the teams consisted of whole families; the Couchman family played the Bateup family, the Bateup family played the Lamberts etc., etc. Most families were large in those days.

The village band consisted of one Couchman family (no relation of mine). The Lambert family were all keen Church Bell ringers.

There were two private schools in the village, the girl’s school, now the offices of the Heath Engineering Works and the boy’s school at the building which is now a depot of Louis Reece Transport business.

In the old days, one had to walk everywhere, apart from people who could afford horses and carriages and a coachman. The boys at the big school wore Eaton jackets and grey trousers and also mortar boards. But on Sunday when they walked to the old church, they wore Eaton jackets and bowlers, with the Headmaster walking behind in frock coat and black silk hat.

The girls from Miss Tabor’s school also walked and the church was always full. The choir consisted of sixteen boys and almost as many men.

The school tuck shop was run by Miss Carey and it was the only shop the pupils of the new two big schools were allowed to use. The discipline was very strict. The shop mentioned is now called Manor Stores (at the corner of Brenchley Road and Furnace Lane).

In the old days, we spent many evenings swimming in the Furnace Pond, before it had become contaminated with fruit wash etc. and the boys’ one aim was to swim the 125 yards across before being a real swimmer.

Before cars were invented the only transport was wagons drawn by a four horse team and a familiar sight was these lovely old shire horses drawn up in front of the Gun and the Town House whilst the wagoner called in for a pint. There was usually a traction engine with its three trucks also drawn up at some time during the day whilst the driver and his mates also had their drinks.

The present generation would be hard put to imagine the quietness of life in the old days.

As one came out of school the only sound was the ringing of my father’s anvil at the groom and Joby Crouch in his forge at the corner of Brenchley Road and Furnace Lane. A lovely sound also, now gone forever.

Before the building of the Village Hall, the Jubilee at the top of the Green was the only place for any village concerts etc. It was turned into a Working Man’s Club when we returned from the 1914/18 War”.

Well done James Turnbull for capturing these wonderful memories.
Thanks to Alan Couchman for kindly giving us a copy of his father’s memories 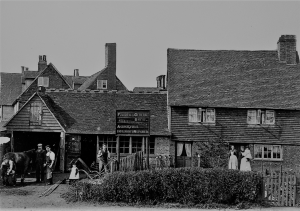