Gunfounder to King Charles I

John Browne was a member of a famous family of gunmakers and in 1618 was appointed one of the 'King's Founders of Iron Ordnance' at 18d. per day. At the time he was employing over 200 men at his main factory at Horsmonden. He ran into trouble during the Civil War when, forced to make guns for the Parliamentary army, he was involved in a plot against his masters and was called before a Committee of the House of Commons. He managed to allay suspicions, however, and continued to cast guns for the Commonwealth until his death in 1651 when the business was carried out by his sons George and John.

John Browne was heavily involved in the Wealden iron industry with his own Horsmonden Furnace as well as having control of six furnaces in Surrey and Sussex, two furnaces in the Forest of Dean.

Horsmonden was one of the centres of the old Wealden ironworking region and Furnace Pond is one of the largest and finest of the artificial lakes made to provide water power for the great hammers.

The mill wheel is no longer there, although the water still cascades over the spillway steps and the circular basin at the bottom in which the wheel used to turn is still there. It was here that John Browne had his famous forge and foundry where, in 1616, he was employing two hundred men in making great guns for the Army and Navy.

Browne had the monopoly on manufacture of royal guns and in 1625, after the outbreak of the Spanish War, his foundry made five hundred guns for the British ships. King Charles I visited the foundry in 1638 to watch a cannon being cast – a bronze four-pounder, forty-two inches long, now preserved in London's White Tower.

In 1645, John Browne and his son were ordered by Parliament to be taken into safe custody, and no visitor was allowed to be alone with either of them. This being because he was suspected of supporting the Royalist cause. Browne appears to have been released in December 1645.

He sided with the Parliamentarians in the Civil War and would not make guns for the Royalists.

The famous foundry closed in 1685 when the manufacture of iron moved to the midlands with their coal fired plants but it is still remembered both by The Gun and Spitroast, formerly The Gun, so-named after it became an inn round about 1750, and by the cannon carved on one quarter of the village sign.

Yalding was a main shipment point for the cannons manufactured here. They were shipped to the naval base at Chatham.

John Browne was born on 11th April 1591 in Chiddingstone and died on 8th June 1651 being buried at St. Margaret's Church in Horsmonden.

The Tomb of John Browne is no longer there and mystery surround its disappearance. A visitor to the church in 1759 was much taken with the large black marble and alabaster monument dedicted to John Browne. It has long since vanished with no record of its whereabouts. 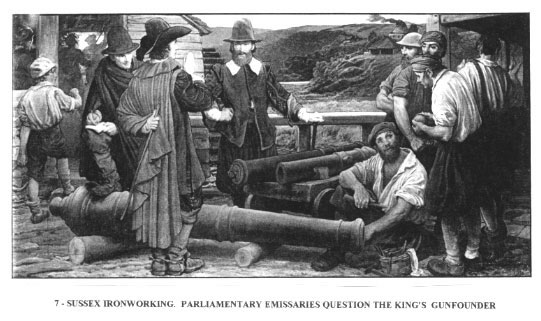 "The Parliament sent two members down into Sussex to summon Mr John Browne, the King's gun founder, to appear before them so that his position may be made clear to him, 1642. Sussex was not only the source of much of the oak to build England's Navy, but also the home of the chief ironworkers of the kingdom. So among the first tasks of the Parliamentary leaders on the outbreak of the Civil War was that of securing the control of such an important industry, and Sussex was again destined to play its part in that constant struggle which made modern England."

Note: Horsmonden lay in both Kent and Sussex, being wholly transferred to Kent in 1895