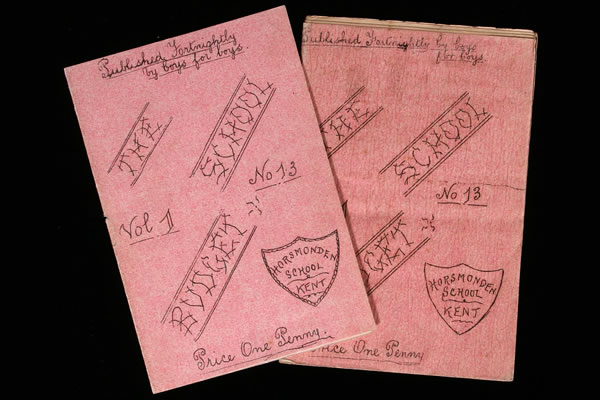 Published Fortnightly by Boys for Boys

Horsmonden School produced a magazine called the Horsmonden School Budget which gained fame when the editorial team asked Rudyard Kipling to write a piece for The School Budget. Kipling was paid 3d per page and an uncashed cheque for 6d is on display at Batemans, Burwash, the former home of Kipling.

The Horsmonden School Budget managed to get further contributions, Max Beebohm sent in a caricature of Rudyard Kipling as his contribution.

There seems to have been a gap in the writing after this, coinciding with Kipling’s winter visit to South Africa. On April 11th, 1898, however, he wrote from Cape Town the letter to the Horsmonden School Budget containing six ‘Hints on Schoolboy Etiquette’.

Whereas the schoolboys of Horsmonden School, in Kent, England, had just become the founders, editors, and proprietors
of the Horsmonden School Budget, they conceived the idea that the author of ‘Under the Deodars ” ought to be open to any offer which might be made for the product of his facile pen.

Accordingly it was resolved to write Mr. Kipling and offer him threepence per page for anything which he might send on, quoting the writer’s own lines.

“The song I sing for good red gold, The same I sing for the white money; But the best I sing for a clout of meal. That simple people give me” – and further stating that unless he chose to comply with their terms they might be led to stifle his next production which should appear elsewhere.

Mr. Kipling was no doubt somewhat astonished at the offer and to realize the fate which might await him did he not comply; but he decided to send them a few hints upon schoolboy etiquette, which appeared in full in a later issue of the Budget, wherein he remarked that the said editors “seemed to be in possession of all the cheek that was in the least likely to do them any good in this world or the next.”

The “Hints” were duly received and printed, which caused the Academy to remark that just at that moment the most il-
lustrious periodical in the world was the Horsmonden School Budget.

Subsequently — in partial revenge, it is to be presumed – the editors of the Budget applied to Mr. Max Beerbohm for a caricature of Mr, Kipling, to be reproduced in a subsequent issue, and were pleased to find in their letter-box just such a picture of the great man as they had wished for.

Of course there was an immediate demand for the respective issues containing the valued contributions ; but it was impossible to reprint the original issues in facsimile form, as they were issued in manuscript only, and for the few remaining copies in the personal possession of the editors payment to the value of their weight in gold was the price asked by the happy owners.

One shudders to think of the deluge of appeals upon the good nature of our leading authors were school publications in general to adopt the course which proved so productive in the present instance.

(Rudyard Kipling). THE SCHOOL BUDGET. Horsmonden, Kent: Printed (Mimeographed) by the Boys of Horsmonden School, 1898. First edition.
Duodecimo, original  pink printed wrappers. Saddle stitched. (One staple at centre).  12pp. Illustrated. A centerfold cartoon; “The Private Secretary”. Contains “a contribution by Kipling, in answer to  a request from the editors for an article”. It “has at top ‘Published Fortnightly by boys for boys’, and at bottom, slightly to the left ‘Price One Penny’

The School Budget
Published Fortnightly by boys for boys
title printed diagonal on cover
The School Budget Vol. I. No. 13 Price One Penny.
[ device of a shield enclosing the words ] Horsmonden School Kent.
This was a 12mo. cyclo-style production, published fortnightly, each number consisting of pp. 12, no title-page, and pink paper covers lettered as above.

BIBLIOGRAPHY OF
No. 13, May 14, 1898, contains a letter from Rudyard Kipling to the Editors, dated Easter Monday ’98 and written from Cape Town, in which he acknowledges the receipt of their letter [asking him to give them a contribution and mentioning the high rate at which they paid their contributors] together with a copy of the School Budget, February 14th [No. 8] and goes on to say:

“You seem to be in possession of all the cheek that is in the least likely to do you any good in this world or the next … But on the other hand and, notwithstanding, I very much approve of your ‘Hints on Schoolboy Etiquette’ and have taken the liberty of sending you a few more.”

He then proceeds to give 6 hints on the following points:

At the conclusion of the letter Kipling says : “You will find this advice worth enormous sums of money, but I shall be obliged with a cheque or postal order for 6d. at your convenience, if the contribution should be found to fill more than one page.” This letter has never been collected.

In the “School Notes” contained in the same number the Editors state that “there is absolutely no truth in the rumour that Mr. Kipling has been appointed a member of the regular Budget staff, nor is he ever likely to become one. We are accustomed to having our employes show a little deference towards us to refer to our ‘cheek’ is a piece of insolence of which no member of our staff would ever be guilty.

Even as the Sun is above the Moon and Stars or as the Union Jack is above the Stars and Stripes, so is a Magazine Editor above a casual contributor, even though the latter be a Kipling.” As Mr. Rider Haggard had treated them even worse taking no notice of their offer to advertise his books in their columns at half rates the Editors go on to say : “If we could find the address of the writer of He is happy as he lingers on the ever golden shore, Where the Rudyards cease from Kipling and the Haggards are no more, we should place him on our free list for life.”

In the next number, Vol. I. No. 14, May 28, 1898, the Editors state that, owing to the number of applications for copies of the previous number, they have been compelled to make the price prohibitive, and they say “the price for the half-dozen unsoiled copies we have in hand is 7s. 6d. each “… and they predict that… in after years a set containing Nos. 13 and 14 will be worth untold wealth. The “Academy” is not far wrong when it calls No. 13 already worth its weight in platinum.” The Editors go on to state that “they have scored heavily by securing a drawing from the pen of Max Beerbohm… the “Whistler of Caricature.”

Mr. Max Beerbohm’s letter, accompanying his caricature, written from “48 Upper Berkeley Street ” and dated “Friday, May 20th 1898,” says inter alia ” I have read Mr. Kipling’s letter, and I agree with you that it’s tone is quite monstrous and unpardonable.

I have much pleasure in complying with your request for a caricature of Mr. Kipling. If it meets with your approval, do not forget to send me a copy of the issue in which it appears. I am an ardent collector of my drawings.” In the following Number these enterprising Schoolboy Editors interviewed Mr. Max Pemberton and secured an autographed portrait from him, which they reproduced.