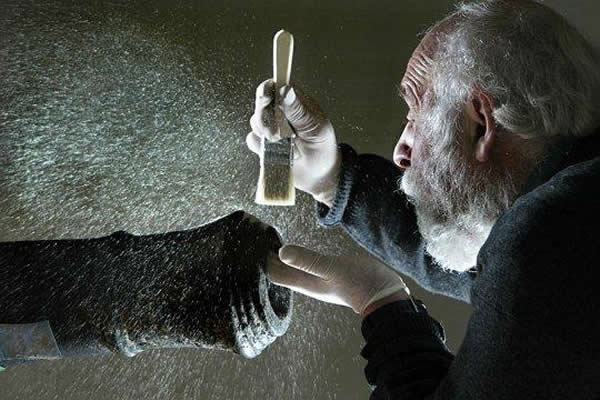 A small iron gun recovered from the wreck of the Caroline warship Swan has been identified as a drake, a lightweight tapered-chamber design dating from the 1620s. It is the only known cast-iron example of such a piece made by Hormonden’s John Browne, gunfounder to Charles I, who was the leading figure in its development and manufacture in England. The gun was found together with an associated carriage, port-lid, and case shot appropriate to its calibre.

Archaeologists found a 17th-century iron cannon, thought to be the only one of its kind still in existence.

It was recovered from the wreck of the Swan, a small Cromwellian warship lost off Mull while attacking the Royalist stronghold of Duart Castle in 1653.

Dr Colin Martin of the University of St Andrews said the cannon had the initials of John Browne, King Charles I’s royal gunfounder, on it.

“In the 1620s Browne developed a completely revolutionary new type of gun – one which was much lighter for the weight of shot it fired, allowing more to be carried on the king’s ships,” said Dr Martin.

“These stronger and lighter new guns were called ‘Drakes’, and the secret of their success was a tapered end to their bores, where the pressure of the gunpowder explosion was greatest.”

St Andrews University said conservationists hope to find out soon whether the cannon is indeed a drake. Work is expected to reveal that it is probably the only iron example of this type of gun known to have survived into modern times.

Update on the Drake Cannon

The cannon from the Duart wreck – the ship we now believe to be the ‘Swan’ – was unveiled at the National Museum in Edinburgh on Jan 10th 2010 following its restoration.

The 415lb iron cannon is one of several items retrieved from the wreck by the underwater archaeology unit from St. Andrew’s University, led by Dr Colin Martin.

The ‘Swan’ was built in 1641 for Charles I, but was later captured by Cromwellians in Dublin. It was part of a small flotilla sent in 1653 to admonish the Macleans, who were staunch Royalists. The clan had decamped to the island fortress of Karnaburg, so the castle was empty. While the 1,000 strong force wondered what to do, they were hit by a violent storm that lasted for 16 to 18 hours. Three of the ships sank – one of them the ‘Swan’.

Several hundred years later, the wreckage was discovered by one John Dadd who was searching for a lobster for his supper! Subsequently, the wreck has been explored, and excavated, by a team from St. Andrew’s University, with funding from Historic Scotland, and the National Museums of Scotland.

The cannon turns out to be a very rare find. Following the restoration – the gun was encrusted and rusted when found – the mark of John Browne, the Royal Gunfounder, was discovered. The bore of the cannon is tapered at the end, and could therefore be made much lighter than previously. This enabled ships to carry more guns, and allowed the guns to have a greater range.

It is thought to be the only one in existence, and will shortly be on view at the National Museums of Scotland.

HMS Swan was a 200 ton warship of the English Royal Navy, launched in 1641. She was the last ship to be built for Charles I. She carried a number of iron cannon, which were cast by John Browne of Horsmonden.

In 1645, whilst anchored at Dublin, and with Swan’s captain absent from the ship, the disgruntled crew were persuaded by the captain of a Parliamentary frigate to change sides upon promise of payment of wages regularly. Thus the ship became part of the Cromwellian fleet.

In September 1653, a Cromwellian task force anchored off Duart Castle, a staunch Royalist stronghold of the Maclean’s, who had already fled to Tiree. On 13 September 1653, a storm blew up from the north west, which resulted in two commandeered merchantmen, the Martha and Margaret of Ipswich and the Speedwell of Kings Lynn being sunk, along with Swan. The wreck of HMS Swan was discovered in 1979.

The story of the ship was featured in Channel 4’s programme Wreck Detectives.

Resurrecting the Swan: Archaeology of a Cromwellian Shipwreck, 1653