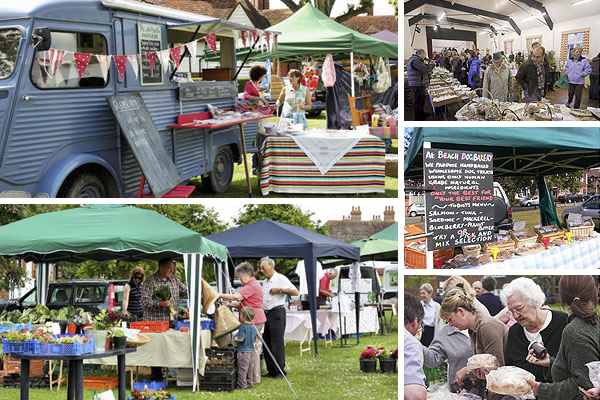 From 2006 the Horsmonden Farmers’ market took place every other Friday on the Green or in the Village Hall. A visit to the Farmers’ Market used to be a great way to spend a Friday morning in the village.

History of the Horsmonden Farmers’ Market

Horsmonden Farmers’ Market was launched in May 2006, by three local mothers, Liz Taylor, Pippa Ankjaer and Mary Moffat, who were motivated to encourage people to shop locally to reduce FOOD MILES and to support the local rural economy. They also wanted to feed their own children on healthy, FRESH, LOCAL food.

The market proved very popular from the beginning, not least for its thriving refreshment stall, run by local charities and community groups for fund raising purposes. It has led to a revival in the use of the Village Green and gives people a location to meet and chat.

The Market had a clear set of guidelines governing the origin of produce sold at the Market. In general produce had to be grown, sourced and produced within a 30 mile radius of the village. There was some flexibility for produce that is hard to find and the occasional exception if a stall is likely to prove very popular (the wonderful olives stall being an example).

There were also the occasional craft stalls, especially in the lead up to Christmas and the market grows in the summer with the addition of seasonal stalls such as asparagus and cobnuts, cherries and soft fruit.